I want to give everyone an update on our adoption and our stay in Riga, Latvia. We arrived on August 15 and will leave Thursday, September 8. Sintija will accompany us to the USA, and we will have to return this fall to complete the Latvian side of the adoption.

This has been very challenging, as Sintija has been in a children's home most of her life and for a good part of that, pretty much had no good supervision. (The last home in Smiltene was much better, but when she arrived, she had a lot of behavior problems that still are issues.)

Sintija will be 13 in October, but clearly is not at her age in maturity. That being said, she does have a good heart and I believe God has wonderful things planned for this young lady, and I am thankful to be a part of that whole endeavor. I believe that she will develop in time, and I have to remember that her challenging us is part of growing up (and I don't take it personally).

The trip itself has been wonderful. Old Riga, where we are living, is a beautiful place, full of very old buildings, churches, narrow, winding cobblestone streets, good restaurants and shops, and a vibrant music scene. I could not have asked for a better place to stay, and am glad we have been able to take in all of this.

We also have been out of the city on several occasions and have been to the Jurmala region three times, including two trips to the beach. (Yes, the Gulf of Riga is cold, but it is invigorating, and the beach there is fine.) This Tuesday, we went to Sigulda, which is a "tourist" town and a lovely place. Although Latvia mostly is quite flat, the Sigulda area has a number of ridges and the Gauga River, and is quite scenic.

Latvia was a "republic" in the old Soviet Union for about 50 years. The country was invaded by the Soviets in 1940, and then was a back-and-forth battleground during World War II as German and Soviet troops did what they could to destroy the country. Afterward, the victorious Soviets gobbled up the country, decimated its economy (and especially the farm economy via collectivization), and shipped hundreds of thousands of Latvians to Siberia, along with bringing in hundreds of thousands ethnic Russians.

Like the rest of the U.S.S.R., Latvia was a grim place during that era. (I remember my own trip to East Berlin in 1982, and it was not a pleasant place by any means.) The Soviets build numerous concrete-and-brick apartment buildings, using pretty much the same floorplan, and these eyesores dot the region. (Yeah, they are pretty darned ugly, really ugly.)

However, the economy has done some growing since it became independent in 1991, and while it was hurt badly during this past recession, nonetheless I still is a better place to live than when it was under communist rule. For one, it actually has nice grocery stores -- and they even sell Jack Daniels in them! I had lunch recently with a friend who lived here before independence, and the changes in shopping alone have been astounding.

Prices are comparable, at least for food, to what we pay in the USA, but incomes are well below what we make. Taxes are pretty high, and gas is about $8 a gallon. Nonetheless, the country's currency, the Lat, is doing well against the dollar. When we first arrived, we were told that the apartment owner wanted to be paid in dollars, but then we found out that the last thing they wanted was the greenback. I made a trip to the bank and switched money.

Latvia is not cheap, but it is less expensive than are most areas in Europe, and especially Scandinavia. An overnight cruise ferry arrives each morning from Stockholm, and Swedish and Norwegian tourists spill off to take advantage of the lower prices.

One thing they take in is the local music scene, which is quite good, even world class, I believe. Bands have played every night in the square next to our apartment, and almost all of them have been good to excellent. (I remarked to one person that I had to cross the Atlantic to hear good American rock 'n roll.) We also went to a concert by the Riga Dom Boy's Choir (which is world famous), and also went to a concert at the Riga Dom itself.

I have included some pictures of the trip.

This young lady is playing the Kokle, which is a Latvian string instrument.

Majori Beach in Jurmala on the Gulf of Riga 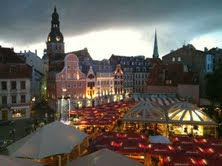 Royal Square in Old Riga from our apartment window 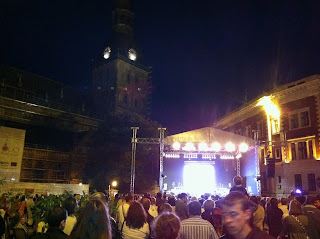 As a first-generation American with Hungarian roots, I can speak to this Stalinization of cities. Dunaujvaros (formerly Sztalinvaros, varos meaning "city") has/had a similar layout.

Godspeed and have a safe, enjoyable, and productive trip!

Glad to hear all is going well with the adoption. You're a good man to be doing that. Keep us posted, wouldja?

So what kind of music are those bands playing? Straight rock & roll?

A lot of them were playing the 50s and early 60s stuff -- and doing it well. Last night's band did some things from Tom Petty and the Heartbreakers, and certainly did nothing to ruin those songs.

What we have NOT heard is the rap and the junk with that hard, rapid beat that seems to be coming out of a computer in a disco hall. No one (thank goodness) has been emulating Lady Ga Ga (the empress of acting like a child in order to get more attention) or some of the other creeps on the American scene these days.

Best of luck with the adoption!

There is a great rock band playing outside our window right now. I'm definitely going to miss Riga!

This has been one of the greatest experiences of my life, and I am thankful to those who gave generously for us to help finance this adoption. I'll have further updates when we come back.