Setting the Economy on Fire

In briefly praising President Obama's bold-but-apparently-not-bold-enough plan, I am struck by how Paul Krugman holds to the view of the homogenized economy: it doesn't matter where one spends, as all spending will "create jobs." That he believes Obama's program would "make a significant dent in unemployment" does not deviate from his overall Keynesian theory.

He adds that the Evil Republicans don't want people to go back to work (because Krugman believes they enjoy making people suffer), so the Great Plan won't be implemented, anyway. I should add that Krugman apparently does not differentiate between a "plan" that simply throws money at the economy which, at best, would employ lots of politically-connected people (most of the people who would be paid directly under this plan are members of labor unions), and something which would be economically sustainable. Like Keynes, he believes that only short-term measures are meaningful and that an economy is just a homogeneous mass of factors that automatically are employed in even proportions when governments add more money.

In his September 9 column, Krugman gives a lot of space to a recent speech by Charles Evans, the president of the Federal Reserve of Chicago, and both the speech and Krugman's reaction continue the myth of the "do-nothing Fed" that is becoming the newest mantra among Progressives. Krugman writes:

So how should the Fed be reacting? Mr. Evans: “Imagine that inflation was running at 5 percent against our inflation objective of 2 percent. Is there a doubt that any central banker worth their salt would be reacting strongly to fight this high inflation rate? No, there isn’t any doubt. They would be acting as if their hair was on fire. We should be similarly energized about improving conditions in the labor market.”

But the Fed’s hair is manifestly not on fire, nor do most politicians seem to see any urgency about the situation. These days, the best — or at any rate the alleged wise men and women who are supposed to be looking after the nation’s welfare — lack all conviction, while the worst, as represented by much of the G.O.P., are filled with a passionate intensity. So the unemployed are being abandoned.

Now, given what the Fed has done these past four years, I am not sure how anyone can claim that Ben Bernanke is fiddling while Rome burns, but I suppose that if one repeats something enough times, it becomes Truth. (With Progressives, they only need to say it one time, since Progressives Speak Only Truth. Just ask them.)

So, let us look at a few things that Uncle Ben has done since 2007: 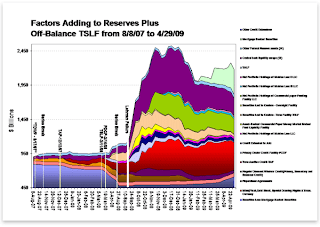 This hardly reflects a "do-nothing" Fed, but the larger problem is that Krugman and Evans seem to be True Believers who follow a belief that if the Fed truly were doing its job, we would have relatively low-inflation AND low unemployment. In other words, they really believe that the Phillips Curve actually is economic law and not an empirical observation. The problem is not that the Fed has failed to "do something," but rather its "something" constitutes actions that do not get at the heart of the massive malinvestments that have thrown economies around the world over the cliff.

(Keep in mind that the inflation-unemployment relationship as espoused by Keynesians holds that there can be no such thing, theoretically speaking, as stagflation, and when it DOES happen, they give us convoluted things like "oil shocks" or some other even that supposedly happens randomly. And there always is a random event occurring, in their minds, that can explain the unexplainable. The Keynesian view is that increasing the rate of inflation serves to CUT wages across-the-board, which then makes labor relatively cheaper, which encourages more hiring.

I find this interesting, given that Krugman is among the economists claiming that INCREASING wages during a depression will increase EMPLOYMENT because the opposite -- cutting wages -- results in a downward-spiral of spending and ultimately deflation. So, we are in that absurd situation in which Krugman both demands real wages rise AND real wages be cut through inflation, and somehow all of this will turn into economic recovery. Only at Princeton at the New York Times, I guess, but we have to remember that These People Are Smarter Than We Are.)


O.K., about the Obama plan: It calls for about $200 billion in new spending — much of it on things we need in any case, like school repair, transportation networks, and avoiding teacher layoffs — and $240 billion in tax cuts. That may sound like a lot, but it actually isn’t. The lingering effects of the housing bust and the overhang of household debt from the bubble years are creating a roughly $1 trillion per year hole in the U.S. economy, and this plan — which wouldn’t deliver all its benefits in the first year — would fill only part of that hole. And it’s unclear, in particular, how effective the tax cuts would be at boosting spending.

Still, the plan would be a lot better than nothing, and some of its measures, which are specifically aimed at providing incentives for hiring, might produce relatively a large employment bang for the buck. As I said, it’s much bolder and better than I expected. President Obama’s hair may not be on fire, but it’s definitely smoking; clearly and gratifyingly, he does grasp how desperate the jobs situation is.

None of the things that are named in the above list will generate wealth in the U.S. economy, or at least put us on a road to real recovery. Instead, it funnels money to politically-favored groups and to Obama's pet projects of "high-speed rail" and "green energy," neither of which can exist without massive subsidies that have to come from somewhere.

In other words, the Obama program that Krugman praises would work by draining the profitable entities in the economy and diverting resources from higher-valued uses to lower-valued uses. Somehow, I think that this is what Krugman WANTS to see happening.

Not that wealthy people like Paul Krugman are going to be hurt by all of this. No, he will have a view of the carnage from the luxury box, and all the while he will decry this moral theater, he will be demanding that more people will be thrown into the arena to be devoured by the lions of depression.

Why do I say this? I say this because had the powers-that-be permitted the malinvestments to follow their natural courses -- as opposed to governments trying in vain to prop them up -- when the balance sheets were groaning with red ink, we would be in a real economic recovery now. Instead, we have Krugman and the Progressives insisting that the malinvestments continue on their merry way and that the government add to them the unsustainable burdens of "green energy," corn-based ethanol, high-speed rail, and unionized government that are resulting in millions of people losing their livelihoods.

Let's say what needs to be said: In the name of ending unemployment, Paul Krugman is insisting that we expand the reach of the state, and if people are going to get jobs, they have to be in the areas of employment that meet HIS approval. If they have different ideas, then let them eat cake.
Posted by William L. Anderson at 9:11 AM

"Keep in mind that the inflation-unemployment relationship as espoused by Keynesians holds that there can be no such thing, theoretically speaking, as stagflation."

That was neoclassical synthesis Keynesianism, with its flawed IS-LM analysis. Keynes' General Theory shows very easily how you can have stagflation, and other Keynesians have never denied the possibility of stagflation.

And this is old news - but not apparently to you.

I watched Richard Gill explain stagflation one time on a film: he moved the aggregate supply curve to the left. That is a nice trick, but it doesn't explain anything.

According to the General Theory, Keynes claims that the workers only are interested in their "money wages," and that government can effectively do a wage cut through the magic of inflation. In other words, increase employment by cutting real wages. (Gee, why didn't I think of that?)

In other words, Keynes makes his claims using standard classical supply and demand tools to explain unemployment -- and how to get more people employed. As I have said before, there is NOTHING in the Keynesian analysis that allows for stagflation. Period. Sorry that you don't like it, LK, but there it is.

Nevertheless, Keynesianism itself is a massive hoax, without any basis in fact or logic, with or without its tortured other-worldly excuses for stagflation.

When are we getting that empirical proof of the existence of the alternative universe of "macro"? Post of picture of it in color.

Post A PICTURE of it [the alternative universe] in color.

A simplified version of Keynesian theory is that Aggregate Demand is the only relevant thing for both unemployment and inflation.

Of course, they have before. Keynesians have never been able to explain this adequatley.

They are all just a bunch of religious nuts who worship Mary Poppins and the Mary Poppins theory of government. And see themselves as special and do not see their victims as human.

LK must think " first to respond" = "smartest". In fact it means "hasn't kissed a girl in entire lifetime "

Professor Anderson, if Keynesians cannot allow for stagflation, why did Abba Lerner (& many others) focus research on it after the 50s. Look at his 1951 Economics of Employment. Similar problems were faced in the Second World War by price administrators like Galbraith.

Keynesians never accept that Bob, because their policies led to enormous prosperity, as their abandonment has led to misery. Those bothersome facts and that annoying real world bursting the laissez-faire daydream.

There is a chance you qualify for a new solar rebate program.
Find out if you qualify now!