OK, Paul Krugman has not claimed that Hurricane Sandy will make us rich or revive the economy, but at least one other mainstream economist has done something of that sort. Peter Morici, an economist at the University of Maryland, has written that disasters such as Sandy ultimately might prove net economic benefits because of all the cleanup and construction (or re-construction) work that follows.

One does not know whether to laugh or cry at this nonsense. Frederic Bastiat effectively destroyed this "Broken Window" fallacy nearly two centuries ago, but the monster continues to poke up his head and people who should know better swallow the idiocy.

Krugman actually did succumb to this fallacy 11 years ago, as Reason.com points out:


The ultimate example of broken-window lunacy comes from Nobel Prize-winning economist Paul Krugman. On September 14, 2001, Krugman used his New York Times column to lecture Big Apple residents about the upside of the utter destruction of the World Trade Center and a good chunk of lower Manhattan just a few days earlier: "Now, all of a sudden, we need some new office buildings...the destruction isn't big compared with the economy, but rebuilding will generate at least some increase in business spending."

Hey, economies are nothing more than spending, right? Just print, borrow, and spend and we'll all get rich, even if we throw a hurricane into the mix.

If anyone is wondering, we got hit with a blizzard of heavy, wet snow that snapped trees and power lines. We have been without power since Monday evening and, unlike Paul Krugman, we do not have a generator (which means we have no running water). Life has been interesting but hardly tragic. I now understand why the Amish tend to go to bed early.

I have included a couple of photos of our place to put this whole storm into perspective. Yes, that is our van on the right. 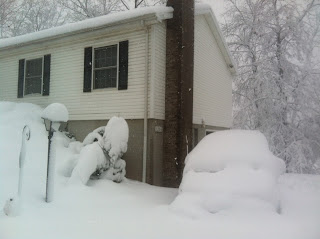 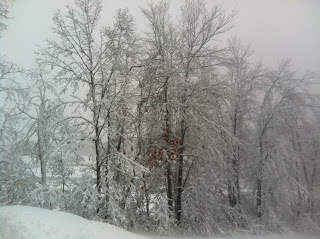 I wonder what Krugsy and the brilliant Morici would think of Mao's Great Leap Forward, where the state-sponsered destruction of capital in China's rural areas was enacted in order to usher in a new era of industrialization. I would think that based on Keynesian reasoning, this would be a logical extension of their philosophy...

When I was in college 40 years ago, Mao was revered as a near-god by my professors who truly believed he had worked an economic miracle in China. Of course, it was the miracle of the wizard who made the blind man lame.

Hardcore statists (and statism is the heart of Keynesianism) will always bow down and worship no matter how many times their little gods fail them.

I wrote on this over at Almost Classical, assuming not even Krugman could have claimed 9/11 was an economic opportunity. When our "economists" are economically illiterate it must be a conscious choice to ignore reason and embrace ideologically driven views.

After Katrina, people moved. That's why the population hasn't fully recovered. Those that moved into the region were poor immigrants taking advantage of plummeting costs and a government-supported (and short-lived) bubble. The overall economy fell, demonstrating that the Broken Windows Fallacy remains. People who could, left. The people desperate enough to return, did not equal the lost economic potential.

It is frustrating that economic ignorance wins, promising simple-minded solutions that feel good.

It is put in those good examples of research papers there that the meaning of details in educational process is well praised and fortunes success to its authors. Generally it means that we all are concerned about our mental health and studies at high school we study in.