One thing I have admired about Paul Krugman has been out out-and-out chutzpah. Here is a guy who told a roomful of economists (including me) in 2004 that the 70 percent top marginal tax rates that existed before 1981 were "insane," but then writes in his blog that the cutting of those rates to 50 percent contributed to the recession of 1981-82. (He does not give us any causality, just rhetoric.)

So, a year ago, in this blog post, he shows the Obama (then) projections of the economy with and without the "stimulus." 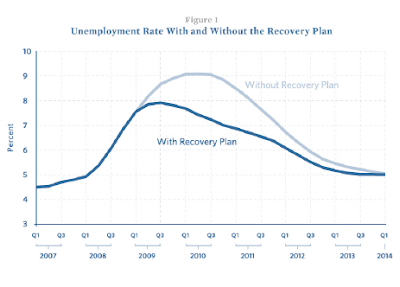 He then adds the following:

Kudos, by the way, to the administration-in-waiting for providing this (the graph) — it will be a joy to argue policy with an administration that provides comprehensible, honest reports, not case studies in how to lie with statistics.

Hmmm. According to the Obama projections - Krugman then claimed were (at least) mostly truthful, our rate of unemployment should be under eight percent. Given that the rate actually is well above 10 percent - and climbing - how does one square such projections with the statement that this administration was telling the truth, especially since Krugman himself in that post says that the numbers on the graph were close to the ones he had projected?

That does not cut it, folks. The Obama administration gave us a set of projections that were as bad as anything coming from the Bush White House. Furthermore, Krugman himself signed onto the figures and now blames the fact that they were bogus on Obama not being fiscally reckless enough and Goldstein, uh, those bad, bad Republicans.
Posted by William L. Anderson at 7:49 AM

One of the puzzling things to me about those who argue that the stimulus wasn't big enough is that the original stimulus is not already spent. It seems to me that the Feds don't even know what to do with the piles of funny-money that they already have.

I suppose this is their argument that enough wasn't spent, but it also illustrates that government can't even spend money very well. ...now that is news.

It's the classic keysenian reaction when the central planners don't break enough windows.