Gee, Maybe We Need Another War

In a post today, Paul Krugman examines an IMF graph of GDP of "advanced" countries and makes a most startling claim:

The projected pace presumably means the blue line above, which is taken from the IMF’s World Economic Outlook Database. The red line shows what would have happened if growth were to continue at its average pace from 2000 to 2007.

As you can see, what Mr. Lipsky apparently considers an acceptable result, good enough to pull back stimulus, is basically to accept the losses in output during the crisis as permanent, leaving us on a drastically lower trend as far as the eye can see.

You mean, all we need is for government to spend more, and then the GDP trends can go on forever? In other words, just print the money.

As far as I am concerned, this graph is inaccurate because it is too optimistic, not too pessimistic. You will notice that it assumes that the world's economies have recovered, and we are back on track for economic growth, as the figure demonstrates. 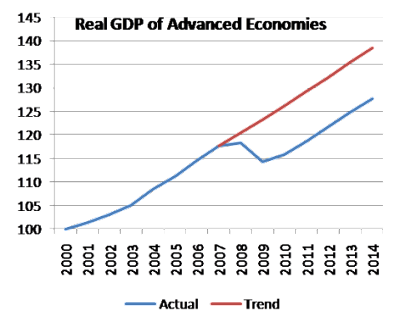 To prove his point, Krugman quotes Keynes regarding his view of the economy in 1932:

I predict with an assured confidence that the only way out is for us to discover some object which is admitted even by the deadheads to be a legitimate excuse for largely increasing the expenditure of someone on something!

Krugman's last line? "And it took Hitler to provide that object."

Yeah, a war. Great jobs program. So, the world's politicians did not have the "courage" to print money and spend, spend, spend, and got war, instead.
Posted by William L. Anderson at 1:10 PM