Krugman and the Hoover Fallacies

One of the economic myths that Paul Krugman, along with most politicians, journalists, and academics, promotes is the outright lie that Herbert Hoover organized his presidency to promote free market economics. Furthermore, he tells us (ad nauseum) that during the last three years of his presidency, Hoover did nothing to stop the Great Depression, leaving it up to Franklin Roosevelt and his New Deal to mitigate the effects of the downturn.

Thus, when Krugman refers to someone as a "Herbert Hoover," he is saying that he or she is not embracing the Keynesian paradigm and, instead, claims that we must "be responsible" in not spending beyond our means. Yes, Krugman believes that such "responsible" behavior actually is irresponsible, at least during a depression.

Thus, in his recent blog post, "Fifty-One Herbert Hoovers," Krugman claims that spending cuts by state and local governments are dragging down the economy:

And David Broder thinks this is a good thing, that Washington should be more like the states.

What amazes me is that Broder doesn’t even seem to be aware that there’s an argument on the other side, let alone that most economists are dismayed by the effects of fiscal austerity. If Broder is a guide to Beltway conventional wisdom — which he usually is — we’ve got a big problem. (Emphasis mine)

Krugman even has a graph that "proves" his point: 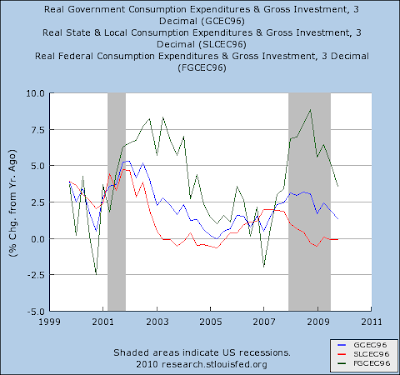 First, Krugman is more correct than he realizes, if he claims that the states are emulating Hoover. Murray N. Rothbard (a much better economist than Krugman could claim to be) laid out Hoover's many government interventions in his classic, America's Great Depression. However, I don't think that is what Krugman wants us to believe.

Second, Krugman seems to be living in Wonderland if he believes that state and local governments can spend money they don't have. (This is why he is demanding that the federal government print a lot of money and give it to the states.) Third, if one looks at the graph, one can see that the economy recovered after the 2001 recession when state spending was down. (No doubt, Krugman will claim that state and federal spending, which increased during the recession of 2001, was the reason for the recovery.)

Now, the "recovery" after 2001 turned out to be a faux recovery, or what I called a "boomlet," which I predicted would end in a worse downturn. However, to Krugman, boom conditions can last forever, just as long as government provides enough "free" money to keep the punchbowl filled. Unfortunately, that is not the case.

There is another point as well. One of the reasons that we are not seeing a real recovery (and only one of the many reasons) is that state governments have become hostages of public employee unions. (Steven Greenhut has written a great book on this subject, appropriately called Plunder.)

State spending has become extremely voracious, and states are raising taxes left and right to fund their generous pensions and pay that unions extracted when the economy seemed to be in better shape. The notion that states raise even more taxes to continue spending at a drunken rate is irresponsible, and the notion that most economists believe that such actions would be good for the economy is pretty pathetic. If most economists believe this nonsense, then the academic profession is in worse shape than I had thought.

Note: I am blogging from the Austrian Scholars Conference at the Ludwig von Mises Institute in Auburn, Alabama.
Posted by William L. Anderson at 11:34 AM