Only in Wonderland Will "Healthcare Reform" Reduce the Deficit

Paul Krugman is at it again, trying to convince us that this monstrosity of a bill is going to produce all sorts of financial "savings" for Americans, and he claims to have brought out the heavy intellectual artillery. Krugman pulls out a figure from that great economic soothsayer, Ezra Klein of the Washington Post which "proves" that revenues from this new bill will well-outstrip expenses: 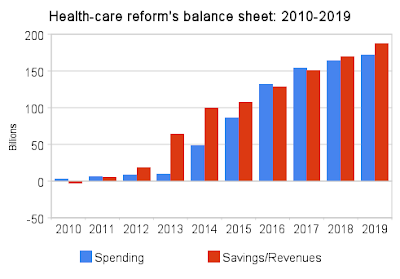 Lest one be a doubter, the Center on Budget and Policy Priorities makes similar claims, and we know that the Left never is wrong on economic policy. However, before we sit back and cheer the good fortune we have before us (you know, "world-class" healthcare and those rich people will pay for all of it), perhaps some wise words from Robert Higgs, an economist whom I respect infinitely more than Krugman or Klein, might be in order:

What has this gargantuan statute wrought? To this question, there can be only one answer: Nobody knows.

I am being quite serious: no single human being knows ― no one can know ― what provisions the statute’s more than 2,000 pages contain. Even if someone had the power to read and remember everything in this massive legislative enactment, he would still harbor a multitude of uncertainties about: how the courts will interpret the law’s general provisions; how the various administrative agencies will flesh out the statute with new regulations; the precise way in which each provision will be implemented; how, when, and in what amounts funds will be made available for carrying out the law’s many stipulated actions; how much resistance the law will meet, both in the courts and among the public, and how these conflicts will be resolved; and countless other matters of critical importance to those directly and indirectly affected by the massive statute ― which is to say, virtually everybody in the United States and a considerable number of people elsewhere, as well.

Already, however, we can say a few things with certainty. One is that this statute, like any other of comparable size, amounts to a Christmas tree for politically favored interests. For months, maybe for years, people will be discovering little provisions tucked into the bill, each of which provides some sort of privilege, protection, subsidy, or other benefit to a particular firm, industry, profession, or other beneficiary. Anyone who has ever toiled through the pages of statutes of comparable length and complexity, as I have for a number of defense authorization and appropriation acts, knows that each such law comprises a host of special-interest provisions.

Higgs makes another point that is well-taken, for Krugman, Klein, and the other cheerleaders for this monstrosity are trying to tell us that a decade from now, no new expenses will be tacked onto this legislation. Right. Higgs says:

We also know that this statute will not be the end of the story of health-care politics in this country. It is, for the current phase, only the end of the beginning. The ink will scarcely be dry in the revised U.S. Code when political factions will undertake to alter or to overturn the provisions just enacted. Thus, within the act’s great expanse, hundreds of little sub-conflicts will rage, as competing interests struggle for control of the state’s coercive power in their area of contention. Politics, in general, is an endless struggle, and the politics of the federal government’s health-care intervention is no exception. Stay tuned.

Finally, because health-care-related economic activity is such a huge part of the overall economy, what happens in this sector will have significant consequences for the operation of other sectors. For example, when Obamacare turns out to be much more costly than the government has claimed it will be, the government’s demand for loanable funds will be greatly increased, with far-reaching effects on interest rates, investment spending, economic growth, and even the U.S. Treasury’s creditworthiness. It is not inconceivable that the burden of supporting this health-care monstrosity will prove to be the (load of) straw that breaks the back of the government camel in the credit markets, where the U.S. Treasury has long been able to borrow the greatest amounts at the lowest rates of interest because its bonds were considered virtually riskless. Indeed, that status as the lowest-risk borrower seems already to be approaching the breaking point, even before the new health-care legislation has taken effect. Implementation of this law can only worsen the Treasury’s plight.

I think that if credibility is an issue, the person with the most in this situation is Professor Higgs.
Posted by William L. Anderson at 10:03 PM