Paul Krugman never ceases to amaze me with how he dishonestly rewrites history. Indeed, he does not so much give us history as he does Democrat-Socialist talking points, which he shouts out while holding his ears shut.

In this blog post, Krugman claims that relative free markets established after the Marxist Allende government fell in 1973 had nothing to do with Chile's prosperity today or the fact that the recent earthquake that hit the country -- one of the most powerful earthquakes ever recorded -- had a relatively small death toll, especially compared to the carnage in Haiti. As usual, the post has a number of howlers. Take the following, for example: 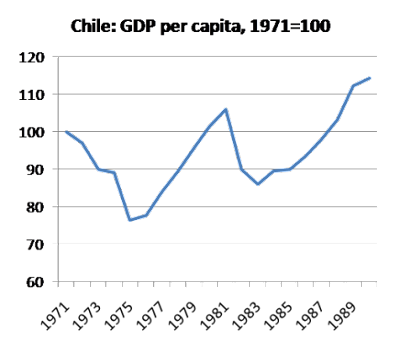 Actually, as you can see from the chart above, what happened was this: Chile had a huge economic crisis in the early 70s, which was, yes, partly due to Allende and the accompanying turmoil. Then the country experienced a recovery driven in large part by massive capital inflows, which mostly consisted of making up the lost ground. Then there was a huge crisis again in the early 1980s — part of the broader Latin debt crisis, but Chile was hit much worse than other major players. It wasn’t until the late 1980s, by which time the hard-line free-market policies had been considerably softened, that Chile finally moved definitively ahead of where it had been in the early 70s.

Ah! Where does one begin? First, Krugman glosses over the fact that Allende was trying to establish a full communist state. His government seized businesses, both foreign and domestic, printed money out the wazoo (creating 1,000 percent inflation), erected huge tariffs and trade barriers, and decimated civil liberties. Yeah, I guess that would cause some economic problems.

Next, just why might have Chile experienced some capital inflows following the overthrow of Allende? Maybe it was because the new government promised not to seize capital invested in Chile by foreign firms, and maybe because the government lowered many of its trade barriers.

Chile was hardly the only country to experience a serious recession in the early 1980s. As I recall, a country named the United States of America suffered its biggest downturn since the Great Depression, and, like Chile, had a robust recovery. There is no doubt that Chile has a much more free economy than do most Latin American countries, and also has a higher standard of living. (I'm sure Krugman has another explanation for Chile's prosperity. Maybe it finally is experiencing the "good effects" of all that money Allende printed nearly 40 years ago.)

As for the country's survival rate following the earthquake, Krugman writes:

As a number of people have pointed out, there’s this little matter of building codes. Friedman wasn’t exactly fond of such codes — see this interview in which he calls such codes a form of government spending, because they “impose costs that you might not privately want to engage in”.

First, building codes by themselves are meaningless. One must have the wherewithall to build structures that actually meet codes. Second, Chile has a strong record of private property rights.

Haiti, on the other hand does not. I recently read that about 80 percent of Haitians live on land of which no one holds clear title. That means that people basically are squatters, and squatters do not build strong buildings. (I am sure that Haiti also has building codes, but even the presidential palace was heavily damaged and the Haiti earthquake was not nearly as strong as what recently hit Chile.)

Being a good socialist, however, Krugman is going to claim that Chile's survival rate following the earthquake is due entirely to state power. And there is one more issue to address: the false notion that economic booms immediately follow economic liberalization.

That often is not the case, as what we saw in the early 1980s. Economies that are heavily regulated or have a lot of state ownership engage in malinvestments that cannot stand after an economy is liberalized. Indeed, given the massive malinvestments and the utter chaos that accompanied the Allende government, I would expect Chile's recovery to take a long time after liberalization, and that is what happened.

However, Keynesians believe that all economies are homogeneous, and that all a government needs to do is add money. Interestingly, that is exactly what Allende did, and even Krugman's little graph does not show that the communist government brought prosperity.

Guess Krugman needs to go back to the drawing board.
Posted by William L. Anderson at 10:52 AM

You make it seem as though Krugman was pro-Allende even though he specifically stated, "Chile had a huge economic crisis in the early 70s, which was, yes, partly due to Allende." Your personal accusations towards Krugman undermine your legitimate arguments about Chile.

In typical commie apologist fashion, a commenter on the Krugman blog today was saying that the economic decline in Chile was the result of "CIA efforts to destabilize the regime".

Not that I'm a fan of the CIA, but this is ridiculous.

Just goes to show how commies are impervious to common sense. Its the typical Chomsky argument. All these commie regimes fail economically and become repressive because of CIA intervention. Otherwise these countries would long ago have created paradise for their citizens.

Also, Carl, I would say that Krugman's statement on Allende being party responsible was exactly how Bill characterized it. A total glossing over. No mention of the fact that Allende was a communist loyal to the USSR. No mention that he tried to nationalize every business in the country. He doesn't want to insult his readership to whom Allende is probably still somewhat of a romantic Latin hero. He's also a socialist himself, and doesn't want to face what his ideology really leads to.

The crisis was not "partly due to Allende," but due to Allende and his Marxist government. When government seizes businesses and then prints money to pay wages, that is going to create a huge crisis. Furthermore, keep in mind that the people who were most targeted by the Allende regime were people of the middle class, whose savings were wiped out by Allende's deliberate inflation.

If Krugman were to admit that the Allende government did more than just "make mistakes," but rather was attempting to hijack the entire economy, then he would have to explain how that was so. Since Krugman holds that printing money almost always alleviates a crisis, he would be hard put to explain away why the Allende "program" had the destabilizing effect it did.

It is true that the CIA tried to undermine the Allende regime, but from what I can tell, the CIA could not hold a candle to Allende himself when it came to ruining the Chilean economy.

If the CIA really had the power to control economies that leftists ascribe to it, why don't they use this power to make our economy better?

Still I guess CIA intervention gives the commies the cover they need to not have to face the consequences of communism. They can still hold out the dream that it can work as long as they have this as an excuse.

I used to read a lot of Chomsky when I was first getting into politics, and he would always make this argument. The failure of communist regimes, and their turn to despotism is never their own fault. Its the result of "capitalist imperialism" and the CIA.

Cognitive dissonance is a powerful psychological mechanism. I'm glad I was able to overcome/outgrow this phase of my ideological development and actually start looking at logic and evidence to form my views.